Destructive but Useful: Generating Electricity from Hurricanes and Tornadoes

Storms, such as hurricanes and tornadoes, are highly destructive. Take Hurricane Dorian as an example. The fourth storm of 2019 pounded the Bahamas, battered the U.S. and the British Virgin Islands, spawned over a dozen tornadoes in North Carolina, and knocked out power for thousands of people in Nova Scotia before weakening and dissipating offshore.

Indeed, these storms are so powerful that they can simply toss anything that gets in their way, whether it’s a house, a car, or even a commercial building. Given the sheer power they release, you may wonder if there’s a way to collect that wind energy from a storm and turn it into electricity.

How Powerful Are Hurricanes and Tornadoes?

An article by the Public Broadcasting Service (PBS), a non-profit American public broadcaster, revealed that the total energy released by an average hurricane is equivalent to a whopping 200 times the electricity-generating capacity of the whole world.

This fact, however, isn’t as simple as it looks. The power wielded by a tornado or a hurricane doesn’t dissipate consistently and predictably. These storms, in fact, are notoriously messy.  They dedicate a majority of their energy to stay alive and continue with their rampage.

The mere thought of collecting energy from unpredictable and dangerous storms, therefore, is both scary and fascinating. While hurricanes and tornadoes contain vast amounts of energy that can power up many houses or buildings, the idea of collecting this energy won’t be a walk in the park. 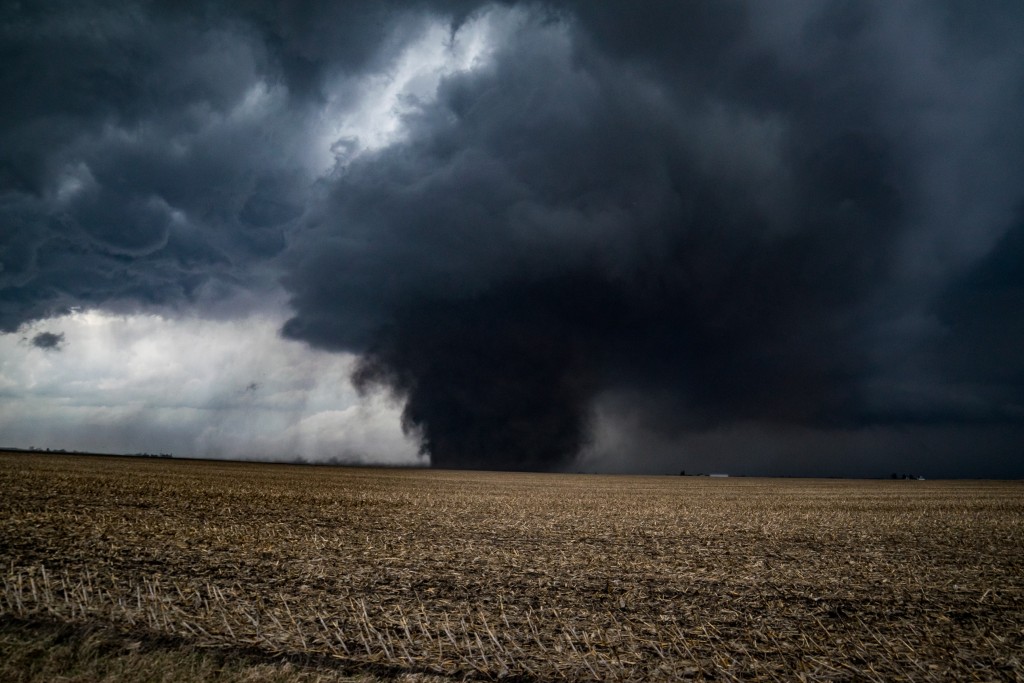 Harnessing the Energy of Hurricanes

Chris Landsea, a science and operations officer from the U.S. National Hurricane Center, says that collecting power from a hurricane has its set of challenges. First, the technology today is unable to harness the energy and heat released by a hurricane. Second, this storm expends most of its power in the water. Collecting that power, from a logistical perspective, therefore, can be a nightmare. Once that storm hits land, the hurricane has already lost most of its momentum and power.

Does this mean that harnessing hurricane energy is no longer possible in any way? Not exactly. Challenergy, a Japanese startup, has come up with a wind turbine design that could generate power in a storm. The design features three rotating cylinders that collect wind energy coming from various directions. Unlike ordinary wind turbines, this new device could work in winds as powerful as 80 meters per second. Once Challenergy completes testing its wind turbine, it hopes to scale up the device for commercialization.

Utilizing the Power of Tornadoes

Gathering energy from these storms is a lot more complicated than hurricanes. If you want to place a windmill to collect power, the device has to be strong enough to withstand extreme force and pressure. On top of that, the windmill should be mobile, which means that it needs to follow the path of the tornado without any problems. The challenge to researchers and scientists, therefore, is to come up with a windmill design that’s both strong and mobile.

Right now, what people have are designs, plans, and theories that could harness energy from hurricanes and tornadoes. No technology exists to effectively collect power from these two storms. Once people do have the tech to harness that energy, however, they can use that sheer natural power as a beneficial renewable energy resource.