Beyond the Beauty: 3 Tips for Creating an Ergonomic Bathroom

Perhaps it’s because of the barrage of cute Pinterest pegs or the popularity of spa-like features, but the trends in bathroom design lately are noticeably focused on aesthetics. There’s usually no problem with this until you find that your visually appealing, spa-haven bathroom looks as if it’s been hit by a tsunami as your husband prepares for work.

When planning bathroom designs, a lot of homeowners make the mistake of focusing on aesthetics too much, overlooking an important consideration: ergonomics. Yes, it sounds less exciting to treat your bathroom as a workplace rather than a blank canvas for art, but a visual appeal has no use when you’re not able to do what you have to do in the space — in the most efficient way. That said, here are some tips to help you create an ergonomic bathroom:

Reconsider the location of shower taps

A common ergonomic flaw in traditional bathrooms is having the taps are right under the shower. Yes, you can easily reach the tap, but you have to endure the cold or hot splash of water before you turn it on. Most people squeeze themselves under the shower just to avoid the jarring shock of the drizzle. Such a design makes it difficult for you to do what you want to do. Experts in bathroom makeovers in Brisbane highly recommends installing taps on the opposite wall. With this, you can test the waters (literally) before jumping right into the shower. No time and energy wasted in ducking under the shower. Talk to experts on how you can best position shower taps in your space.

Another bathroom feature that adds stress in bathroom use is cupboards. Ever experienced fumbling through a cupboard just to get a single tissue roll? It’s a waste of time and energy. You won’t have to struggle with that though if you just use drawers. With one pull, you can easily see the contents. Plus, it’s easier to organize stuff, assigning different bathroom essentials to each level of the drawer.

If you do want to keep the cupboards, though, install lighting inside the storage area so you can easily get what you need. Or, consider repurposing your existing cupboards, converting them into open shelves. This will not just increase visibility but also add a point of visual interest in the space. There’s aesthetics in ergonomics. 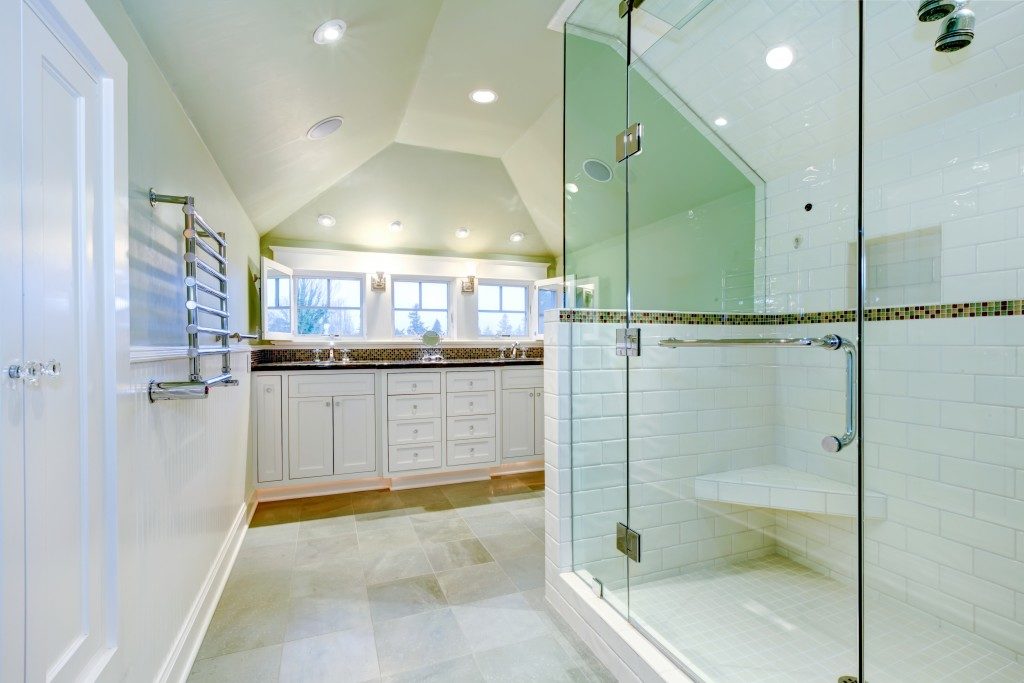 An ergonomic bathroom isn’t just easy to use, but easy to clean as well. When looking for fittings, fixtures, and materials, go for those that are low-maintenance. For instance, tiles clean up well and are resistant to pools of water. When you use floating vanities, along with freestanding bathtubs, it’s also easier to scrub the surfaces underneath them. Additionally, adding more storage areas keep surfaces clear and empty. The point is when choosing design elements to introduce in the space and arranging such details, consider how you can best keep the cleanliness of the area.

Again, don’t just focus on the aesthetics of your bathroom. Having a spa-like haven is good, but a haven that’s not easily disturbed by the morning rush is better. Partner with interior design experts in building an ergonomic bathroom.